Second-year guard Sindarius Thornwell seeks to prove his worth and capitalize on his rookie success with the new look Los Angeles Clippers.

A graduate of the famed Oak Hill Academy, Sindarius Thornwell received heavy recruitment before eventually committing to the University of South Carolina.

The young guard displayed an impressive scoring tendency and defensive instinct that saw many collegiate accolades come his way during his four-year stint at Carolina. Thornwell bagged All-SEC First Team honors along with being named SEC Player of The Year during his senior year with the team. In his final year, he led his seventh-seeded Gamecocks to the Final Four of the 2017 NCAA tournament. Averaging 21.4 points and 7.0 rebounds during his final year, Thornwell declared for the 2017 NBA draft.

Thornwell was closely scouted by the Clippers entering the 2017 NBA draft. His potential as a combo guard capable of even guarding the wing positions proved a good fit for the modern NBA.   A draft day trade with the Milwaukee Bucks for the 48th pick saw Thornwell’s acquisition to the team for cash considerations.

After a series of unsuccessful draft picks in the past few years, Thornwell looked to prove doubters wrong. In an impressive summer league stint, Clippers fans caught glimpses of Thornwell’s aggressiveness on the offensive end during his 26-point debut.

“He can score,” said Doc Rivers after his debut. “But what I like more about him is his toughness.” Rivers sees Thornwell as a shooting guard or small forward. “He can defend,” he said. “He’s a scoring defensive guard, he can play the two and the three. He’s probably a tweener, so he can do both. His in-between game is amazing. And he makes threes. When you see them, they don’t look good but they go in.” 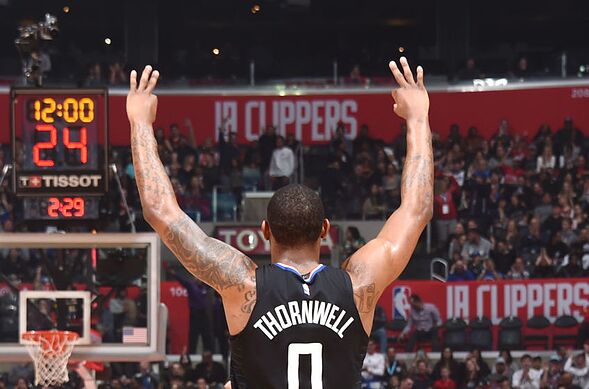 A star studded Clippers team that was decimated by injuries resulted in trial by fire style on court experience for then rookie Thornwell. Defensive assignments for Thornwell saw the rookie matched up against stars James Harden and Lebron James among others. Thornwell showed glimpses of what his future might look like under the Clippers with impressive defensive acumen and aggressiveness on the offensive end.

With the Clippers embracing a new direction after the Blake Griffin trade, Thornwell has a chance at becoming a fan favorite for years to come. Thornwell shot a respectable 37% from three over the season and his effort on the defensive end and mentality drew praise from the coaching staff and saw a few starts for the rookie.

What the future holds for Sin City

Deandre Jordan‘s departure ended an era filled with ups and downs for the Clippers that saw playoff appearances and a successful regular season franchise. A new revamped Clipper roster would be what was promised under Jerry West and Rivers for the 2018-19 season.

Under a myriad of contracted guards within the roster, Thornwell seeks to prove he can fill not just a roster spot but provide meaningful minutes for a team that seeks to establish a new identity.

If speculation can be made with evidence from the past season and summer league as sample size, Thornwell will be around for years to come.

Mavericks, Clippers make international swap; Johnathan Motley headed to LA – ProBasketballTalk
Does Danilo Gallinari have anything left to give the Los Angeles Clippers?